The term “connectome” was introduced by Olaf Sporns, Giulio Tononi, and Rolf Kötter in a 2005 paper, The human connectome: a structural description of the human brain, where they stated that “The connection matrix of the human brain (the human ‘connectome’) represents an indispensable foundation for basic and applied neurobiological research.”

In one sense, the quest for unraveling the wiring diagram of the brain–for understanding brain architecture–goes back a long way, at least to the 17th century and Thomas Willis (1621-1675), and beyond, to classical antiquity. But in another important sense, the concept of a “connectome” has revolutionary implications, hinging on the word “matrix”. Connectomics is leading neuroscientists to organize information about neural circuitry in a systematic way, and subject the results to formal network analysis.

A complete connectome would include not just the brain, but the nervous system as a whole, along with the other systems of the body (muscular, endocrine, digestive, and so on) related to the nervous system (that is, providing inputs and receiving outputs)–a connection matrix that has been called a neurome (Bota et al., 2015, PNAS). Here is the general form of such a complete connectome, which, of course, is bilateral, representing the right and left halves of the body: 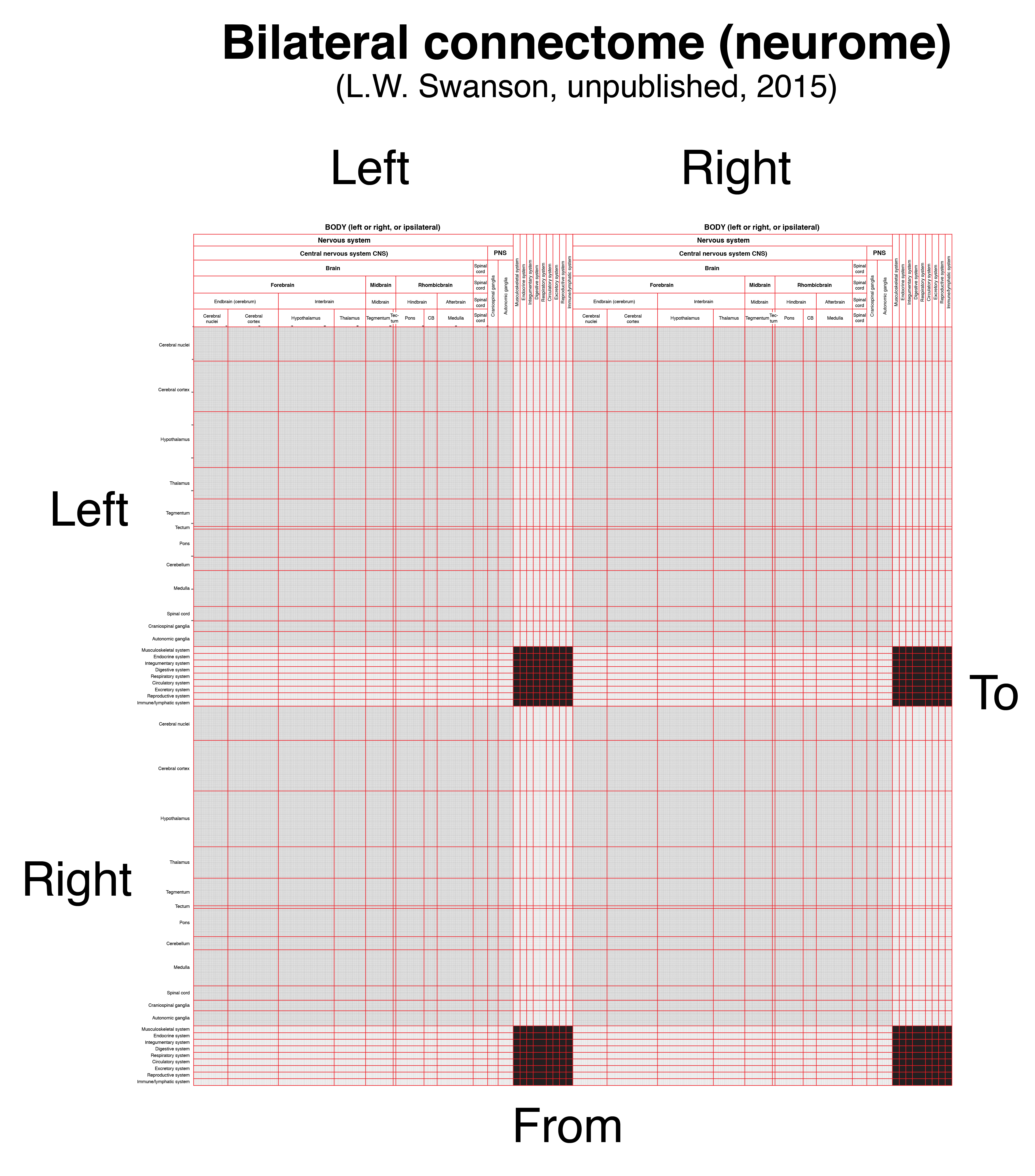 Larry got interested in how the brain controls basic appetites and drives like hunger and thirst during graduate school in the Department of Psychiatry at Washington University. Then during his postdoctoral years in St. Louis he began to study the neurobiological organization of brain circuits that control motivated and emotional behavior more generally. This boiled down to figuring out experimentally what the connections of motivation-related brain regions actually are and how they fit into the rest of the network forming the nervous system as a whole (see Andreas Vesalius’s 1543 drawing of the human nervous system, above). Larry was lucky to begin this lifelong research goal at the beginning of a revolution in neuroanatomy—starting right around 1970—and to study with three of its leading pioneers: Max Cowan, an expert in anterograde connection tracing; Boyd Hartman, a pioneer in immunohistochemistry applied to brain connections; and Hans Kuypers, a major innovator in retrograde connection tracing. Connectomics is the latest tool used to analyze and model nervous system circuitry, done primarily in collaboration with Mihail Bota and Olaf Sporns.

See the Rat Neurome Project page for an update on Swanson group progress in this arena.

Here is a list of Larry’s papers on the behavioral neuroscience of motivation and emotion.

Here is a list of Larry’s papers on the structural neuroscience of connections forming the circuitry underlying motivation and emotion.

Here is a list of Larry’s papers related to neuroanatomical methodology.

Here is a list of Larry’s papers on development of brain structural organization.