A. INTRODUCTION
B. SWITCH FROM VENTRICLES TO BRAIN TISSUE
C. THE CELL THEORY OF SCHLEIDEN AND SCHWANN
D. A 4-SYSTEM NETWORK MODEL OF NERVOUS SYSTEM STRUCTURE-FUNCTION ORGANIZATION

An ultimate goal of systems neuroscience is to explain the mind and behavior in terms of the structure-function wiring diagram of the nervous system. What are the basic design features of the system? What are the parts, how does each one work, and how do they interact in a functional system? How do injury and disease change the system—disrupting thought, emotion, and behavior—and how can the damage be repaired most effectively?

The quest for understanding the basic organization of the brain and nervous system is a long one, going all the way back to Classical Antiquity in Greece and Rome. The first general theory about nervous system function was called the “3-Cell Theory”—the three cells being the three major parts of the ventricular system, cell 1 the right and left lateral ventricles, cell 2 the third ventricle, and cell 3 the fourth ventricle: 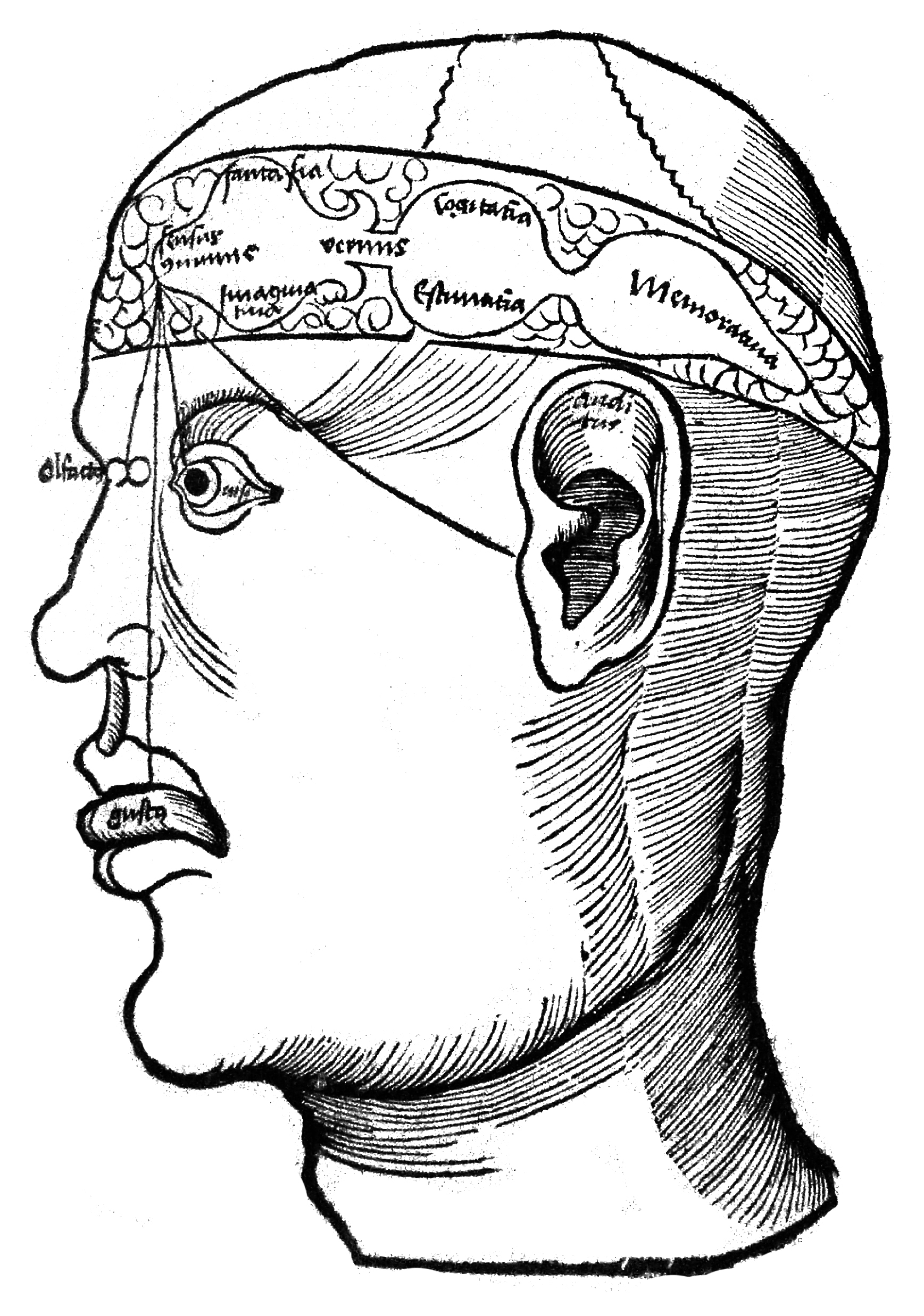 The basic idea was that neural information (called psychic pneuma at the time) is transmitted by the sensory nerves (olfactory, gustatory, optic, and auditory are shown), which converge in the rostral part of the lateral ventricle (first cell), where the psychic pneuma intermixes to form the common sense (unified conscious awareness). There is then a sequential processing of the psychic pneuma: in the caudal lateral ventricles imagination is elaborated, and after regulated passage through the interventricular foramen (with the choroid plexus or vermis acting as a valve), cognition and mathematical ability are generated in the third ventricle (second cell), and then after passing through the cerebral aqueduct, memories are formed in the fourth ventricle (third cell). Behavior is produced by psychic pneuma passing from the third cell down the spinal cord to the nerves. This theory of nervous system function lasted from the fifth to the seventeenth century. In essence, it proposed that nervous system function resides in the ventricular system, with the gray and white matter tissue simply acting as supporting walls.

B. SWITCH FROM VENTRICLES TO BRAIN TISSUE

In 1664 Thomas Willis turned the 3-Cell Theory upside down: he proposed that psychic pneuma is generated in the gray matter of the nervous system and transmitted by the white matter—relegating the ventricular system to a waste disposal system. Three and a half centuries later this is still how we basically view nervous system function. Willis went on to divide the gray matter into 4 nodes interconnected by 12 white matter tracts. Although Willis did not illustrate this scheme, it can be outlined on a contemporary illustration of the human brain by Nicolas Steno (1669): 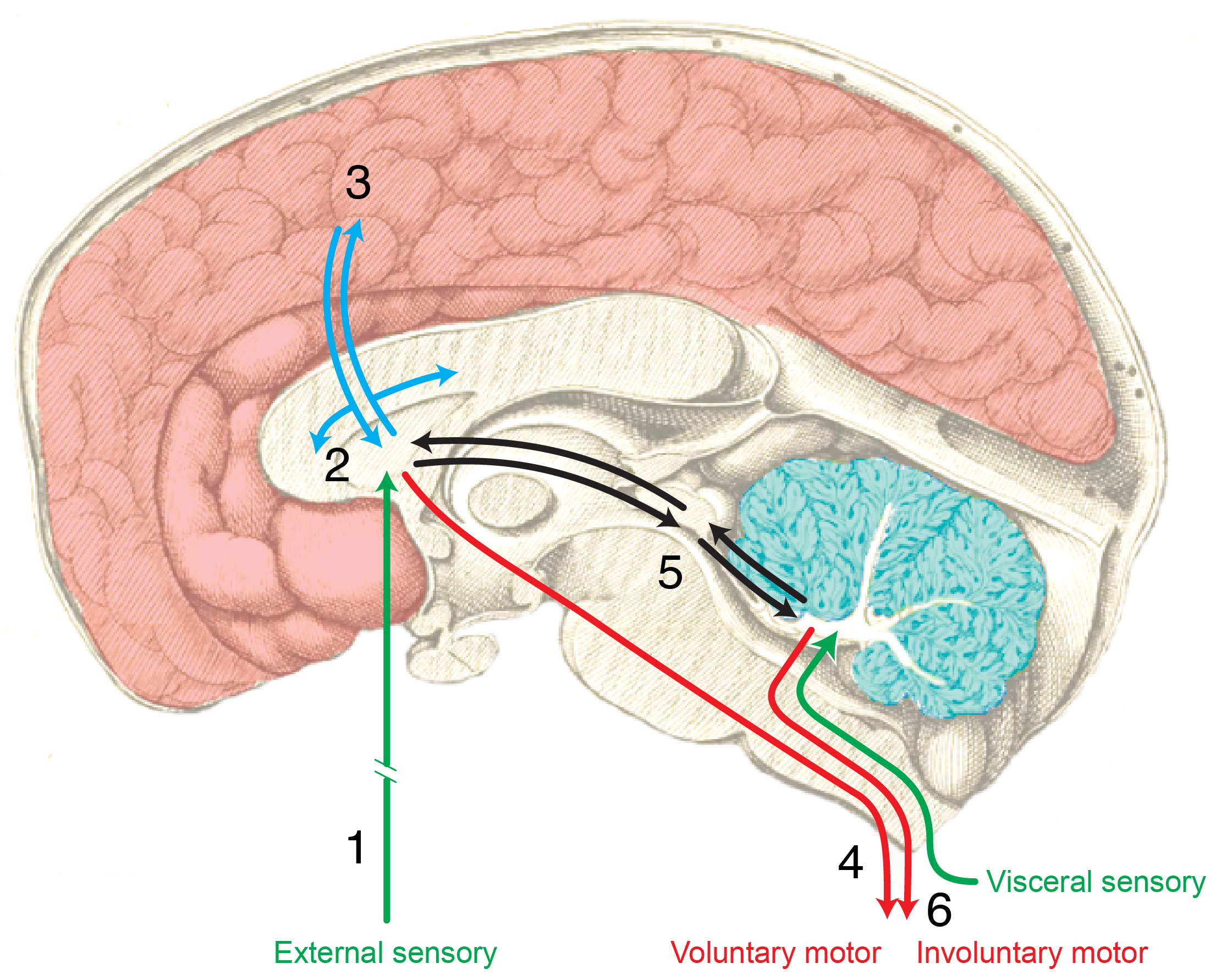 In this scheme, the “common sense” was transferred from the lateral ventricles to the corpus striatum (or basal ganglia, which he discovered), imagination was ascribed to the corpus callosum (a vast sheet of white matter), “artificial” (episodic) memory and voluntary behavior were relegated to the cerebral cortex (3 and 4, respectively, in the figure), “innate” memory (instinct) and involuntary behavior was controlled by the cerebellum (6 in the figure), and psychic pneuma (neural information) circulated between cerebrum and cerebellum via the tectum (5 in the figure). This was a brilliant conceptual framework, although none of the 12 white matter pathways he proposed based on crude gross anatomical dissection has held up to modern experimental analysis.

At about the same time, René Descartes proposed another brilliant conceptual framework for thinking about what we now call the reflex control of behavior. In essence, he replaced the ventricular system of the 3-Cell Theory with the pineal gland, where he postulated that the brain interacts with the mind—where sensory information is converted to behavior via the spinal cord and nerves. This view, centered on the pineal gland as a unique feature of the human brain, was severely criticized at the time and never gained traction: 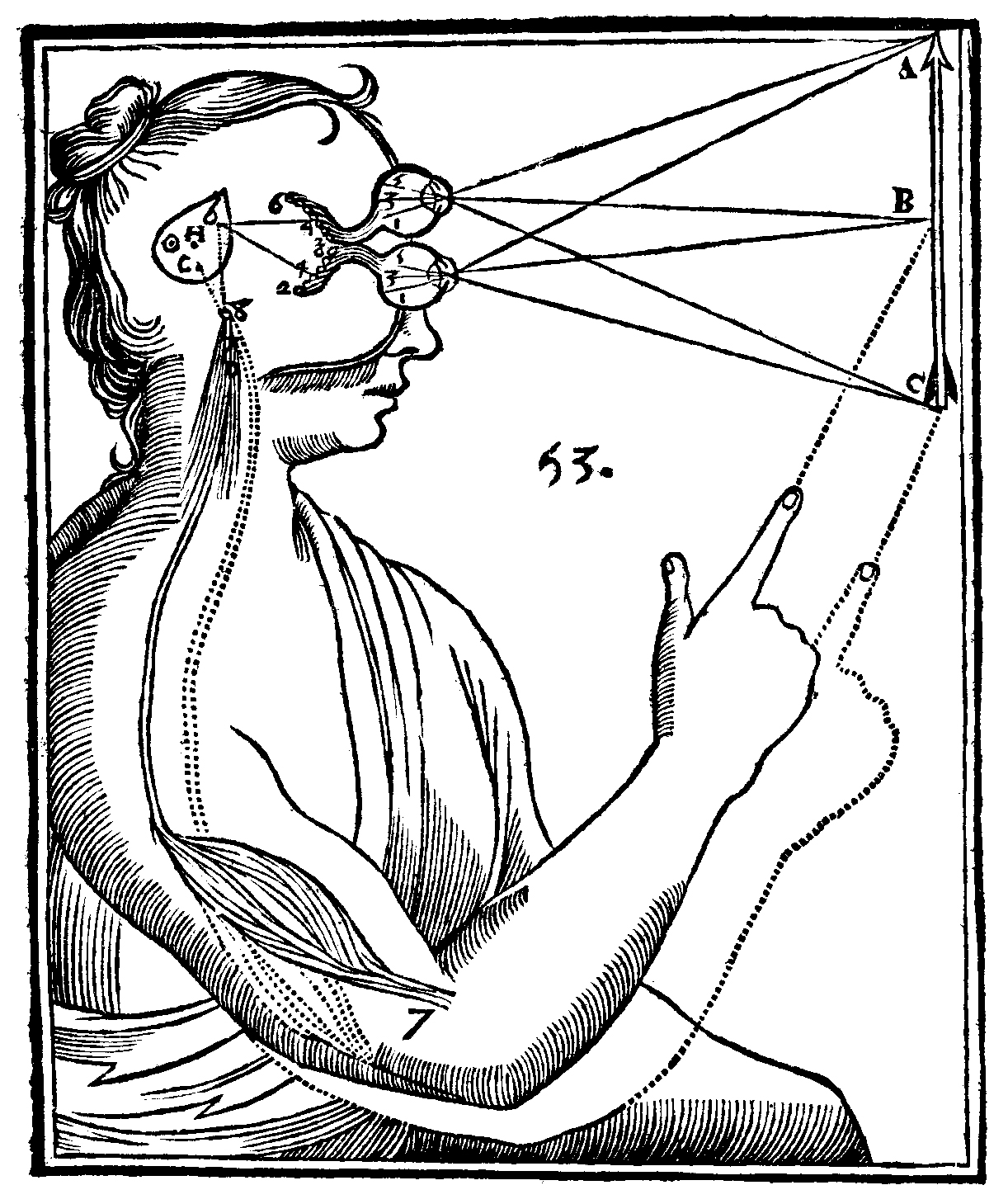 The basic concept of reflex control of behavior by the nervous system (René Descartes, De homine, 1662).

C. THE CELL THEORY OF SCHLEIDEN AND SCHWANN

The cellular basis of tissue organization was established in the 1830s, and by the 1890s it became clear how it applied to nervous system tissue, the most complex of all. Santiago Ramón y Cajal led the way in this thinking with two foundational generalizations—that the nerve cell (neuron) is the basic unit of neural circuitry (the neuron doctrine), and that in general, neural information in circuitry flows in one direction—from dendrites and cell body to axon and its terminals on other neurons or other effector cells like muscle or gland (law of functional polarity).

Based on extensive examination of the nervous system, Cajal proposed a cellular model for the reflex and voluntary control of behavior (muscle movement): 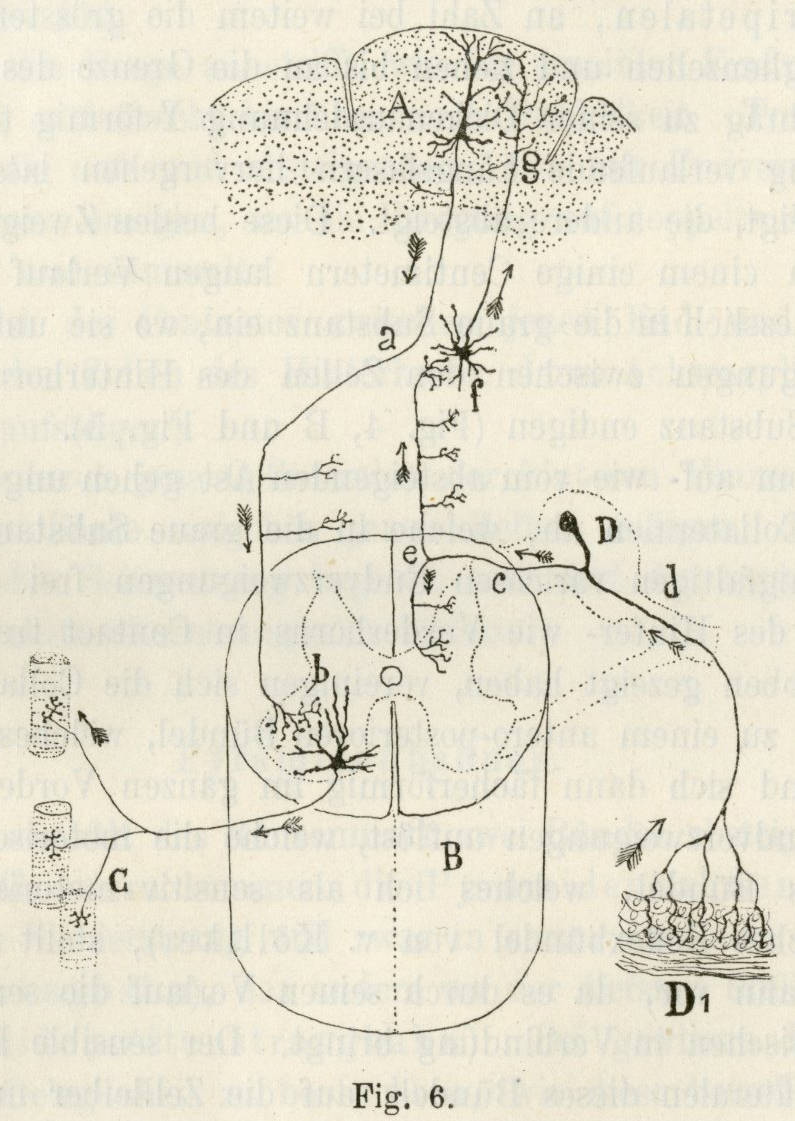 The model that Cajal proposed for the overall organization of the nervous system has three basic components: motor system, sensory system, and cognitive system interconnected in a precise way. Recently, a modern update of Cajal’s model has been proposed (Swanson, 2000, 2003, 2012). Here, the motor system control of behavior is modulated by inputs from three rather than two interconnected systems (sensory, cognitive, and behavioral state), and the sensory input is modulated by feedback from the behavior produced by the motor system:

A goal of connectomics is to clarify the architecture of nervous system organization based on computational analysis of complete tables or matrices of its connections at successively deeper levels of analysis: macro, meso, micro, and nano. We hypothesize that when the complete mammalian connectome (neurome) is subjected to network analysis, the graph will have the form illustrated below, with 4 nervous system megamodules corresponding to the 4 systems illustrated above. The actual results of the analysis are eagerly awaited. 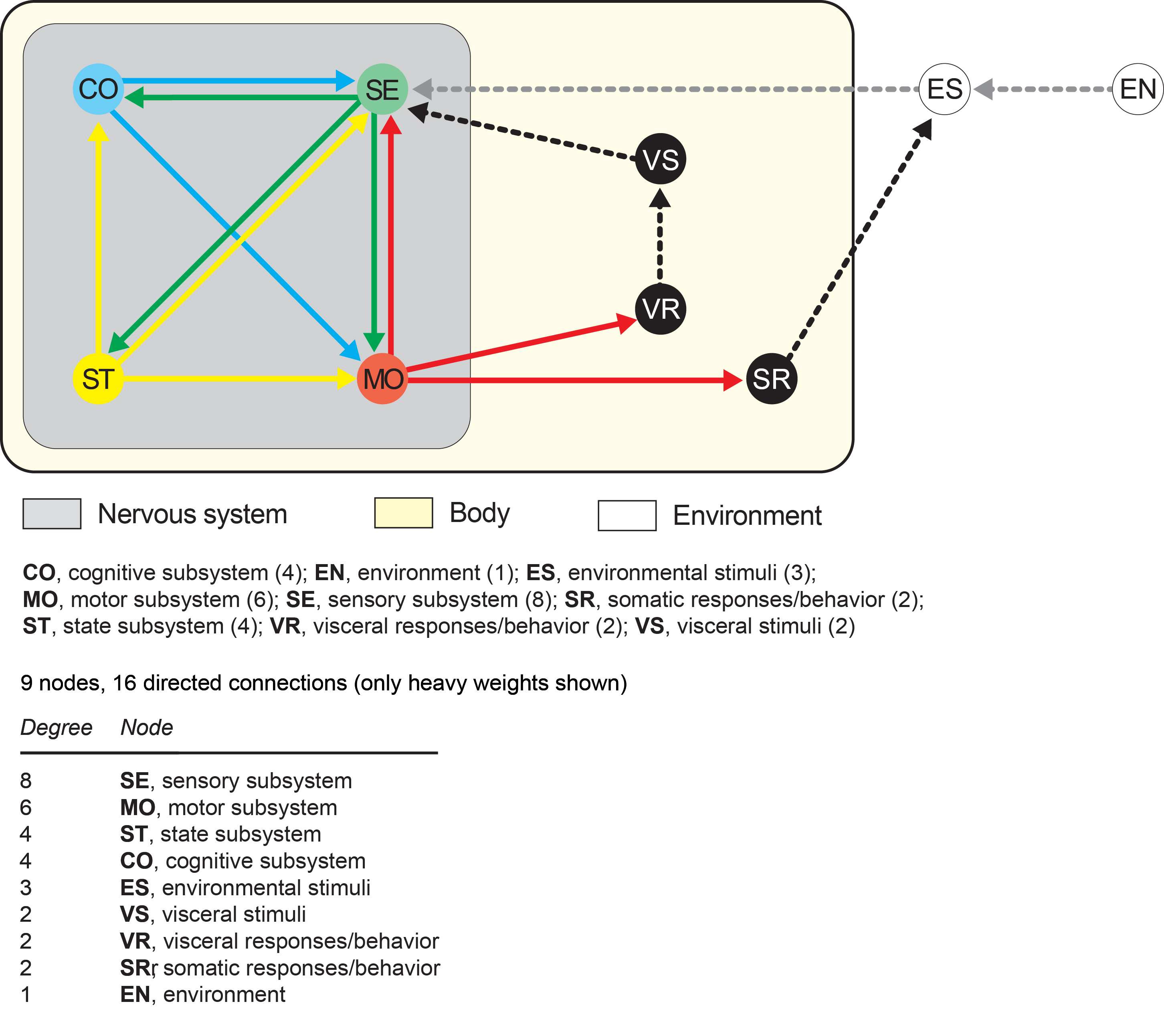 Graph of the 4-systems network model of the nervous system (L.W. Swanson, unpublished, 2015).

For more information about the 4 systems model see: